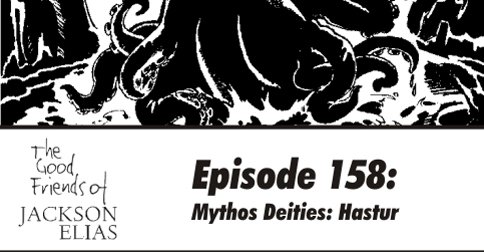 We’re back and we’re taking a last look around Carcosa, wondering where all these tentacles came from. Robert W Chambers was more concerned with masks, moons and mists. Now there seem to be monsters everywhere and people are calling Hastur a god. Who is responsible for all this? Like everything relating to Carcosa, the answer is elusive and ambiguous.

For the past few episodes, we’ve explored the Carcosa Mythos of Robert W Chambers. Its most famous elements — The King in Yellow, the Yellow Sign and Hastur — are usually seen as part of the Cthulhu Mythos, but we worked hard to keep these elements separate. Well, this is the episode in which we mash it all up again. Hail Hastur!

We go on a deep dive into the Lake of Hali, trying to understand just what Hastur is. Bierce created him as a benign god of shepherds. Chambers took the name and made him a star (or maybe a place, or a person…) Lovecraft mentioned the name in passing but never defined anything. Derleth turned Hastur back into a god, or at least a Great Old One. Lin Carter added the Chambers back into Derleth’s work. Call of Cthulhu added new layers of complexity and John Tynes tore it all down and wrote a new mythology. So where does that leave Hastur? And how did the King in Yellow become his avatar when there is no mention of this in Chambers, Lovecraft or Derleth?

Hastur is an unusual deity, even by the standards of the Mythos. The Malleus Monstorum lists a number of avatars with no real thematic connection. He is associated with a variety of creatures, some of which seem like odd choices. Beyond his connection to The King in Yellow, it can be difficult to know what to do with him. We spend the latter half of the episode coming up with ways we might use Hastur in our games.

Some of the specific works we mention in this episode include:

The Origins Awards will be announced on Saturday the 15th of June, shortly after this episode goes out. Masks of Nyarlathotep is on the shortlist for Best Roleplaying Supplement. We shall keep you posted about how it fares.

The Blasphemous Tome 4b

Issue 4b of The Blasphemous Tome is slithering towards completion. This is our first attempt at a supplemental Tome, using some of the material we were unable to fit in issue 4. There will also be a bumper crop of specially written material, including a brand new Call of Cthulhu scenario from our very own Paul Fricker. You can also look forward to the mix of articles, fiction and art that you’ve come to expect from earlier Tomes. Unlike the previous editions, however, The Blasphemous Tome 4b will be a PDF-only publication. Anyone backing us at the time of release (probably early July) will receive a copy via Patreon.

If you would like to listen to a different take on The King in Yellow, Scott recently joined Ralph Lovegrove on his excellent podcast, Fictoplasm. They speculated about what the foundations of horror roleplaying might have been if Chambers rather than Lovecraft had been its main influence. This was just part of a longer series in which Ralph has explored novels in which fantastical works of fiction have proved more real than anticipated.

Wise souls fear to speak the name of Hastur the Unmentionable. They know that the right words have the power to tear the world apart, letting madness rush in. Our songs have the same effect. We present two of them in this episode, offered in thanks to new Patreon backers.