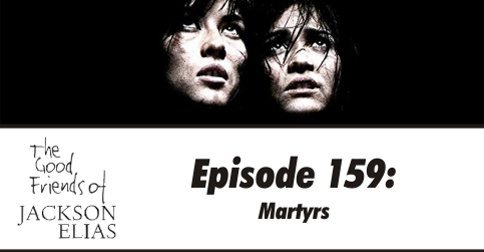 We’re back and we’re putting ourselves through torments. Watching Pascal Laugier’s 2008 horror film Martyrs is not necessarily a pleasant experience. This is not to say that it is a bad film — quite the opposite. It is, however, a gruelling one. The unrelenting cruelty and torture it depicts make it highly divisive. Not only is Martyrs viscerally nasty but it is emotionally draining and potentially quite upsetting. This is not a film for everyone. Be warned.

From the build-up we’ve offered, you may wonder why anyone would want to watch a film like Martyrs. This is not a simple question. Some of us are drawn to the extremes and understanding why can be difficult. This is especially true in the case of Martyrs, which is not remotely titillating. We spend some time trying to understand its appeal, and a little more finding ways in which it can inform our gaming.

Additionally, we touch upon the larger New French Extremity movement of which Martyrs was a part. This cinematic explosion of blood and terror — largely confined to the first decade of this century — explored uncomfortable subjects unflinchingly, depicting violence in a way that is both repellent and beautiful. We mention a few other highlights in passing:

We also mention a few of Pascal Laugier’s other projects, as well as the 2015 American remake of Martyrs. None of us has seen the latter. From reviews and interviews, it seems to be another example of neutering a work of dark horror and turning it into something safe and palatable, wrapped up with a nice, happy ending. Have we learnt nothing from the remakes of The Wicker Man, The Haunting and The Vanishing?

The other Laugier films we touch on are:

You may have noticed that we have mentioned little about the actual plot of Martyrs. This is deliberate. Few other films we have seen benefit quite as much from going in cold. Martyrs is full of surprises, regularly shifting tone in ways that disorient and shock. If you are not completely put off by the idea of unglamorous violence and degradation, we recommend you read no more about the film before watching it.

The Blasphemous Tome 4b

Issue 4b of our fanzine, The Blasphemous Tome, is nearing completion. This is our first experiment with putting out an interim Tome between our normal releases. Longtime listeners will know that we send a printed fanzine to our Patreon backers every year. This time, we thought we’d release a PDF of the material we were unable to fit in the last Tome, along with a whole bunch of new content. The main feature is a brand new Call of Cthulhu scenario from our very own Paul Fricker and a fantastic cover by the wonderful John Sumrow. Issue 4b will go out in early July and we shall send a copy to everyone who is backing us on Patreon at the time of release.

We have spared you any singing in this episode. After spending an hour talking about extreme torture and suffering, it seemed unfair to inflict any of our own. This is a short respite, however. We have new Patreon backers to thank and there will be song in the next episode.