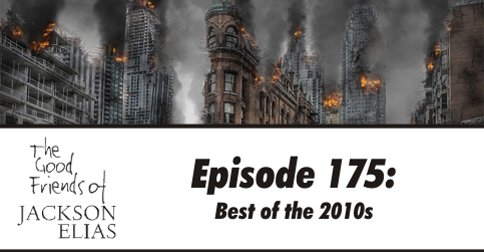 We’re back and we’re playing favourites. Sure, we love you all, but you do understand, right? And we also have favourite films, books and RPGs too, some of which were created within the last 10 years. We know that a lot of other people have taken the end of the decade as an opportunity to create similar lists, but we”re different! For a start, we’re doing it over a month later than everyone else.

In many respects, the 2010s were a terrible decade. We’ve seen political upheavals that will affect the world for generations, an ecological crisis that will affect it for even longer, and, worst of all, David Bowie died. It’s all been a bit shit, really.

But there has been some good stuff too. The 2010s were a boom time for media in general, and horror in particular. We have been living through a golden age of genre books, films and television. In this episode, we pick our favourites from each of these categories, explaining why we think our choice deserves to be held up as the best.

Masks of Nyarlathotep on How We Roll

Scott has been running the Peru chapter of Masks of Nyarlathotep for the How We Roll podcast, with an all-star cast of guests. Players include Seth Skorkowsky, Keeper Murph from the Miskatonic University Podcast, Veronica from Cthulhu and Friends, and Eoghan and Joe from How We Roll. The first few episodes are already available, with new horrors seeping out every few weeks thereafter.