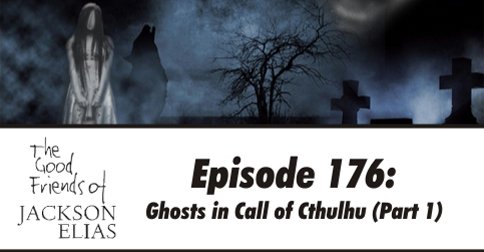 We’re back and we’re getting the willies. Has anyone ever used that phrase and not received a derisive response? But, as we’ve discussed before, laughter is often a way of protecting ourselves against fear. And what is scarier than a good ghost story?

This is the first of two episodes looking at ghosts and how they tie into Call of Cthulhu. Our original plan was to do it all in a single episode, but we talked too much.

As a result, this first part is largely us exploring what we think ghosts might be, as well as discussing what we do and don’t like in a ghost story. If you think the answer is “ghosts”, you might be surprised.

Next episode, we shall dig more into how we’d use ghosts in our games, and whether ghosts even belong in Call of Cthulhu.

Deadlight and Other Dark Turns

The print edition of Dead Light and Other Dark Turns is due out shortly. This classic-era Call of Cthulhu anthology features Alan Bligh’s much-loved “Dead Light”, along with a new scenario, “Saturnine Chalice”, by our very own Matt Sanderson.

Good friend of the Good Friends, David Kirkby, is auctioning another blasphemous sculpture to raise money for charity. After the success of his earlier Pad’thulhu auction, he’s now selling a unique, hand-painted idol of Cthulhu. The money raised will be split between Cancer Research UK and the firefighting efforts in Australia.

3 comments on “Ghosts in Call of Cthulhu part 1”