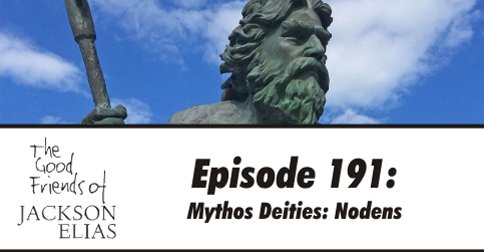 We’re back and we’re poking around this here abyss. Someone told us we could find Nodens down here. It’s not pleasant work looking for him, however. The cold has left us quite hoary and there are endless bloody nightgaunts flapping around and getting in the way. Maybe we should have checked that other site on the Welsh border instead. Oh well. We’ll just have to write our complaints on some lead tablets and toss them into the deep. We’re sure Nodens has nothing better to do than read them.

This is the latest instalment in our ongoing series about the deities of the Cthulhu Mythos. Previous subjects include Dagon, Shub-Niggurath, Yog-Sothoth, Nyarlathotep and Azathoth. This time, we’re delving deep into the abyss to learn about hoary Nodens, charting his progress from obscure Celtic deity to the public face of the Elder Gods.

Nodens in Call of Cthulhu

With lockdown easing around the world, we are suspending our run of backer specials. Do check out last week’s final episode about television if you haven’t done so already. Backing us at any level will grant you instant access to this episode and the entire back catalogue.

Paul’s seafaring scenario, “Full Fathom Five”, is now available from DriveThruRPG! This is a rollicking adventure set aboard a whaling vessel in the 19th century, packed with blood, excitement and period detail.

Scott on Without a Net

Scott recently appeared on the Out of Character spin-off of the Without a Net podcast. He and host Jupiter Sanders talked about HP Lovecraft and how his life shaped his creations. This is a meaty discussion.

UNLAND on Ain’t Slayed Nobody

Scott also recently recorded another game with Ain’t Slayed Nobody, as a special crossover with How We Roll. He ran his scenario “UNLAND” from the Stygian Fox anthology, Fear’s Sharp Little Needles. The first part will be available on the 22nd of September.

Issue 5.5 of The Blasphemous Tome is now available! This is the PDF-only interim edition of the Tome that we publish mid-year. The latest issue contains an all-new scenario by Scott Dorward called “The Murder Shack”, dripping with blood, ichor and despair. You will also find articles by the Good Friends and some of our wonderful listeners, as well as artwork from Evan Dorkin, John Sumrow, Jonathan Wyke and many others. Anyone backing us on Patreon at any level will be able to download a copy, as well as issue 4.5, which contains an original scenario by our very own Paul Fricker.