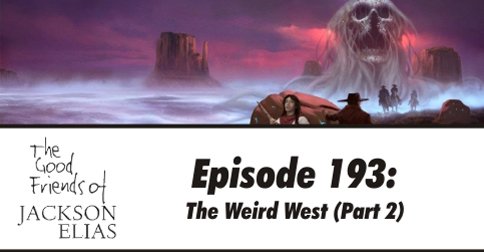 We’re back and we’re heading down darker trails. We really hope that those are tumbleweeds rolling towards us. That rustling in the sagebrush is making us jumpy too — we’re pretty sure that sagebrush doesn’t usually have that many eyes. For a such a wide-open place, this landscape is getting mighty crowded. Maybe if we read a few passages from this here dime novel Necronomicon we can get through the night without any eldritch varmints making a meal out of us.

This is the second of two episodes exploring the weird west. Last time, we looked at a couple of other RPGs and what they might be able to teach us about the setting. Now, we’re focusing on the Down Darker Trails supplement for Call of Cthulhu. From our superficial knowledge of the genre, it seems like all this weird west stuff came out of the pulps and Lovecraftian horror, so it’s good to see it moseying on back to its roots.

We also take a little time to jaw about the general appeal of playing RPGs set in the Old West, as well as how all this weird stuff got mixed into our westerns. Finally, we tie off our discussion by talking about our own experiences of Lovecraftian gaming in the Old West.

The Appeal of the Old West

Following on from our recent series about cults, Scott has recorded two special episodes with our good friend Bence Szlamka. These explore the weird fusion of cult and conspiracy theory that has arisen in the age of social media. Both parts are now available in our normal feed.

The Murder Shack and The Green Pumpkin

Scott has also been busy streaming games with our good friends at Ain’t Slayed Nobody. First, he ran “The Murder Shack”, his scenario from issue 5.5 of The Blasphemous Tome. Then, shortly after, he ran an improvised session just based on the proposed title “The Green Pumpkin”. Both streams were recorded and are now available on Twitch.

And speaking of Scott recording videos, he has also been playing with How We Roll. This time, he ran a new scenario for them called “The Night Bus”, set on, um, a night bus. The recording was made for the Tabletop Gaming Live convention, which went online this year. At the time of posting, the video is not available. We will update these show notes as soon as it is.

And if all that weren’t enough, Scott has also been recording with our good friend Andy Goodman, as part of his new Grizzly Peaks Radio podcast. This time, Scott was a player in “The Watchers of Warbleswick”, a classic Call of Cthulhu scenario plucked from the pages of White Dwarf magazine, back when it still published that kind of thing.

James Corp is organising an online RPG convention on the 19th and 20th of December. You can find out more information on Warhorn or by following James on Twitter.

Last Calls for The Blasphemous Tome 6

Issue 6 of The Blasphemous Tome is coming soon! There is still time if you would like to submit a short text article (no more than 500 words) or a piece of black-and-white artwork. Please ping us on social media (Facebook, Twitter, Reddit or Discord) if you have any ideas. The cut-off date is the 18th of October.

One comment on “Three Views of the Weird West part 2”