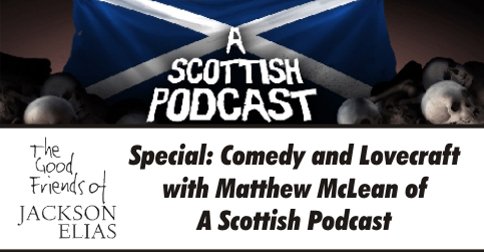 We’re back with another special interview episode. This time, however, we’re breaking away from cults and turning back to a topic we discussed in episode 127: that uneasy ground that lies between comedy and horror.

The basic premise is that Lee, a failed disc jockey, has decided to reboot his career by starting a paranormal investigation podcast. He ropes his long-suffering friend Doug into producing it and the two of them travel across Scotland, investigating weird cases they are increasingly forced to take seriously.

What stops A Scottish Podcast from being just another paranormal drama is its cast of wildly eccentric supporting characters. The stories swing wildly between comedy and horror, usually keeping the two elements discrete but sometimes mixing them to great effect (such as in the recent special, “Fish Supper Over Innsmouth”).

Be warned that A Scottish Podcast is even more sweary than the Good Friends and that the humour is very Scottish. As Matthew mentions in the interview, however, this has not proved a barrier to international listeners.

In our discussion, Matthew and I talk about the relationship between comedy and horror, where the humour lies in Lovecraft, and how he goes about writing and creating the podcast. This last part turned into a general discussion about producing audio drama which should prove informative to anyone thinking about doing so.