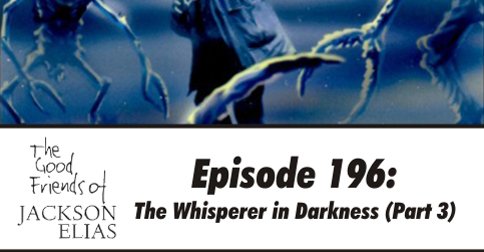 We’re back and we’re running low on dogs. Have you any to spare? For some reason, we seem to be getting through loads of them. They are considered consumables, right? We tried asking the breeder at the kennels but he just told us that we’re barking. And the fact that Professor Armitage only needed one dog to deal with his intruder is making us self-conscious. Regardless, we’ll carry on throwing dogs at this problem until it goes away. We’re dogged that way.

This is the third instalment of our multi-episode investigation of Lovecraft’s classic weird tale, “The Whisperer in Darkness”. Last episode, Albert Wilmarth had made a new pen pal up in Vermont, Henry Akeley, who told him some troubling tales linked to local folklore. Now, things are ramping up as Akeley’s farm comes under attack from shadowy alien presences.

Once again, the pandemic means we recorded this episode remotely. Our current working arrangements are like the long-distance collaboration between Wilmarth and Akeley, only with fewer dead dogs.

Issue 6 of The Blasphemous Tome is heading off to the printers. This is the print-only fanzine we put out every year for our Patreon backers. It is licensed by Chaosium and contains material for the Call of Cthulhu RPG. In particular, this issue features a new scenario by our own Paul Fricker, called “Of This Men Shall Know Nothing”, set in the latter days of World War II.

Interview With Matthew McLean of A Scottish Podcast

Scott recently interviewed Matthew McLean, the writer, producer and co-star of A Scottish Podcast. While the name may not suggest it, this is an audio comedy/drama that feels like a Call of Cthulhu campaign. As well as talking about finding the humour in Lovecraft, Matthew offered some fantastic advice about how to create audio dramas. The special episode is now out — check your podcast feed.

Scott and Paul took part in the October Horror Movie Challenge this year, watching a horror film every day throughout the month. We offer an overview of our month’s viewing in the episode. You can also find Scott’s reviews on this very website.