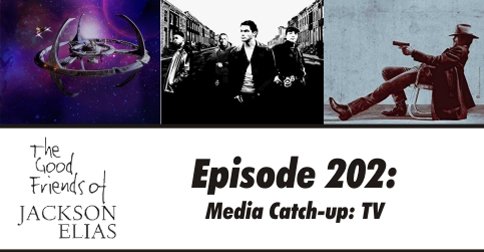 We’re back and we’re sucking at the glass teat again. Like all lazy creative types, we watch a lot of TV and try to convince ourselves it’s research. There certainly is a lot that the structure of modern television can teach us about roleplaying games. Absorb too much, however, and you may find that your games become riddled with adverts for erectile dysfunction pills. Maybe not the kind of healing potion your party is looking for…

After the positive reception to our short run of lockdown specials for our Patreon backers last year, we thought it might be fun to carry the format into the occasional regular episode. This time, we each discuss some of the television we’ve been watching recently and how it’s informing our gaming lives. Even though none of the programmes we discuss are horror, we still manage to find plenty to borrow for Call of Cthulhu.

Once again, the pandemic means we recorded this episode remotely. Chatting over Google Meet is like watching each other on television, only with worse scripts.

Like so many other conventions, ConTinegncy moved from being a physical to a virtual event this year. As part of his ongoing mission to demonstrate his contempt for sleep, Matt ran an unwise number of games over the week. At least he didn’t need to change out of his pyjamas to do so.

Matt has also been busy backing Kickstarters. Not that he’s ever stopped. This time, he backed Stephen Hickman’s campaign to create a new version of his idol of Cthulhu. The horror in resin has now arrived and Matt has taken a picture to share with us.

The Australian actual-play podcast Distant Grey Gaming recently ran Paul’s 19th-century whaling scenario “Full Fathom Five”. They have also recorded an interview with Paul, which you will find in their feed.