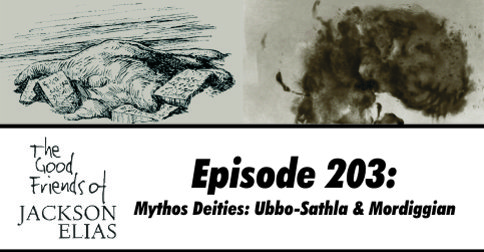 We’re back and we’re contemplating the mysteries of life and death. Sure, we could read a lot of dusty old religious texts but we’d rather seek the wisdom of the prophet Klarkash-Ton. His visions of the origins of life and the final mysteries of death are enlightening, uplifting and thoroughly entertaining. Sure, most religions don’t describe our creator as “yeasty” or suggest that our passage to the next world will involve priests gnawing on our bones, but some truths are uncomfortable. While we’re not certain we’d worship either Ubbo-Sathla or Mordiggian, we’ll happily learn all their juicy secrets. There’s something comforting in the thought that the brackets of our lives are as absurd as everything that happens between them.

This episode is the latest in our series on the deities of the Cthulhu Mythos. It is also a return to talking about Clark Ashton Smith, one of the key members of the original Lovecraft Circle. Smith was always the most imaginative and weirdest writer amongst Lovecraft’s correspondents, and the gods we discuss in this episode are no exception. Ubbo-Sathla, the unbegotten source, is at least as blasphemous a parody of creator deities as Lovecraft’s own Azathoth. And Mordiggian, the invisible eater of the dead, is a surprisingly sympathetic psychopomp, even if you have to watch out for his priests.

Previous discussions about Mythos deities have covered Dagon, Shub-Niggurath, Yog-Sothoth, Nyarlathotep, Hastur, Azathoth and Nodens. We have also had a general discussion of the gods of the Cthulhu Mythos and a look at the role of religion in all this yog-sothothry.

Once again, the pandemic means we recorded this episode remotely. Google Meet is the blasphemous fain in which we gather to bring you these offerings.