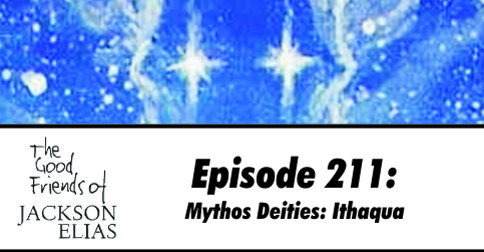 We’re back and we’re flying the friendly skies. Well, maybe not that friendly. OK, they’re downright malevolent. Ithaqua may be one of the fastest ways to travel but the in-flight entertainment is chilling. And the less said about the landings, the better. At least we have these nifty little tokens to remember our trip by. If only we had the time to enjoy them before freezing to death…

This episode is the latest in our series on the deities of the Cthulhu Mythos, looking at Ithaqua — the wind-walker. Previous entries include Dagon, Shub-Niggurath, Yog-Sothoth, Nyarlathotep, Hastur, Azathoth, Nodens, Mordiggian and Ubbo-Sathla.

In our discussion, we look at Ithaqua’s origins, how he has been developed over the years, and how we might use him ourselves. Additionally, we delve into the conflation of Ithaqua with wendigo legends and how we might untangle them. Thank you very much to everyone who suggested resources to help us understand the actual wendigo legends and how they have often been misused in horror fiction. Especially, we would like to thank Shane Hawk and cornysams on Twitter and Stephen Wall, Al Smith and Giles on our Discord server. Any misinterpretations of the materials they suggested reflect solely on us, not on these fine people or the resources they suggested.

If you’d like to learn more about the background and misrepresentation of wendigo legends, the resources in question are:

We have just sent out the first issue of our new email newsletter! If you would like to hear more about upcoming episodes, side projects, and other cool things, sign up now.

Scott has made a couple of guest appearances on other podcasts recently. Glenn McDorman of the Elder Sign podcast talked to him about one of the horror stories that influenced him in his youth — “The Werewolf and the Vampire” by R Chetwynd-Hayes.

Scott also spoke to Andy Goodman of Grizzly Peaks Radio about creating atmosphere in horror games and whether actual play podcasts could be as frightening as audio dramas. This might lead to spooky things!

We have also released the first of a two-part discussion with fan-favourite YouTuber and author Seth Skorkowsky. In this instalment, he and Scott talk about GMing tips, the constraints of genre, and UFO cults. The second part, in which Jon Hook joins us, goes into the Modern Mythos podcast Jon and Seth recently launched. Check your podcast feed for all these episodes.

Issue 7 of The Blasphemous Tome will be creeping your way before the end of June. It features a brand new Call of Cthulhu scenario, licensed by Chaosium, written by our very own Matt Sanderson. This episode, we discuss the wonderful cover art created by our good friend John Sumrow. Everyone backing us on Patreon by the end of this month will receive a Tome. Please see our Patreon page for more details.