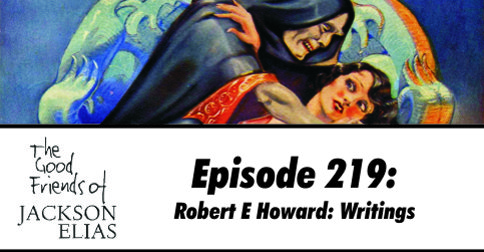 We’re back and we’re hitting the books. That’s probably not fair, though. Just because they’re full of boxing tales doesn’t mean they can hit back. And two-fisted stories don’t actually seem to have any fists of their own. We’re beginning to suspect that this fiction stuff is all made up.

This episode is the conclusion of our two-part look into the life and works of Robert E Howard. Last time, we offered an overview of Howard’s life. This time, it’s the turn of his work.

As well as being the creator of Conan the Cimmerian, Solomon Kane, Kull of Atlantis, and the Pictish king, Bran Mak Morn, Howard initiated both the sword and sorcery and weird western genres. In his sadly short career, Howard wrote horror, boxing yarns, comedies, historical adventures, and action stories. With the encouragement of his friend H P Lovecraft, he penned tales of the Cthulhu Mythos. And that’s without mentioning his voluminous poetry output. He was as versatile as he was prolific. While we cover the broad strokes of his career, we would need dozens of episodes just to catalogue his work. As a result, this is an incomplete and highly idiosyncratic summary of Howard’s career and legacy.

Our next episode wraps up this series by exploring one of Howard’s most famous stories, “The Tower of the Elephant”.

Our main research sources for this episode are:

We have started work on issue 8 of The Blasphemous Tome. This is the semi-annual fanzine we produce for our Patreon backers. While the issue is filling up fast, there is still space if you would like to submit an article of 500 words or under, or any black-and-white artwork. You can contact us at submissions@blasphemoustomes.com.

This issue will include our usual year-end features, including “The Ludomancers” and “Episodes of Insanity”. We offer a few hints about what to expect in the news segment.

Paul recently attended the Owlbear and Wizard’s Staff convention in Leamington Spa, where he played Barbarians of Lemuria and ran Call of Cthulhu.

Scott is deep into the October Horror Movie Challenge, watching a horror film every day and posting a full review to this very website. If you would like to take part too, please join the discussion on our Discord server or on Twitter.

2 comments on “The Works of Robert E Howard”