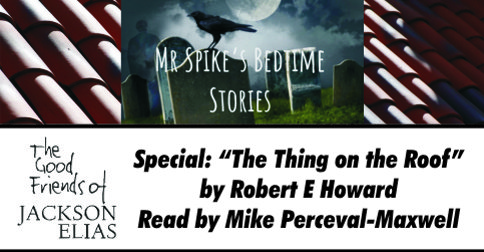 We’re back with another special episode. This time, we have a reading of Robert E Howard’s “The Thing on the Roof” by our good friend Mike Perceval-Maxwell. You may remember Mike as the director and narrator of our performance of A Christmas Carol in late 2020. Since then, he has started his own podcast, Mr Spike’s Bedtime Stories, where he reads works of weird fiction. He has also performed many of these live on the Good Friends Discord server. Mike is a seasoned voice actor who has worked with the BBC, and his readings are something special indeed.

“The Thing on the Roof” is one of Howard’s punchier Mythos tales. While it follows a pretty stereotypical storyline for Lovecraftian horror, it is filled with Howard’s trademark energy. “The Thing on the Roof” was originally published in the February 1932 issue of Weird Tales and has been collected and anthologised countless times since.

If you are interested in learning more about Robert E Howard, we recently released a pair of episodes on his life and works. Our next episode discusses his classic Conan tale, “The Tower of the Elephant”. We also recently explored the sword and sorcery genre, which Howard originated, in some detail.

Other classic weird tales you can find on Mr Spike’s Bedtime Stories include: