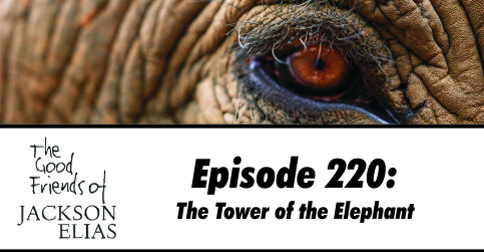 We’re back and we’re preparing to pillage. This weird, shining tower looks like it should contain treasures, or at least an interesting story to discuss. There’s rustling in the undergrowth surrounding it, but we’ll just ignore that for now. If it proves to be something dangerous, Matt can rip up one of his rare Magic: the Gathering cards and blow the remains at it. And once we’re inside, we must find out why they call it Tower of the Elephant. Maybe there’s a petting zoo.

Main Topic: The Tower of the Elephant

After spending a couple of episodes discussing Robert E Howard’s life and works, we’re now exploring one of his stories. “The Tower of the Elephant” was the third Conan tale published and arguably the first to really pin down his character. As well as discussing the story itself, looting it for gaming inspiration, we use it as a springboard to talk about Conan in general.

If you haven’t already done so, you may also want to check out our discussion of the sword and sorcery genre, of which “The Tower of the Elephant” is one of the earliest examples.

This Halloween sees the 40th birthday of Call of Cthulhu. Despite making us feel old, this is a cause for celebration! At Chaosium, the celebration is taking the form of a special 40th anniversary edition of the Call of Cthulhu rulebook. With its leather binding and sinister sigils, this looks like just the kind of tome we were warned would destroy us.

Issue 8 of The Blasphemous Tome is nearing completion. This is the semi-annual fanzine we produce for our Patreon backers, containing brand-new licensed material for the Call of Cthulhu RPG. The latest issue will contain a full-length, modern-day Call of Cthulhu scenario called “Night Bus”, by our own Scott Dorward.

Scott is running what seems to have become the annual Halloween game for Ain’t Slayed Nobody. Following the success of last year’s “The Green Pumpkin”, we are improvising another Call of Cthulhu scenario based on listener suggestions. The main theme this time is “Totally Not a Cult Gathering”, with cuppycup, Wes Davis, Rina Haenze, and Joe Trier from How We Roll as players.

The stream goes out on the ASN Twitch and YouTube channels on Wednesday, 27th of October, at 3-6 PM EDT/8-11 PM BST. It will be available on demand at the ASN YouTube channel afterwards, and will eventually appear as a podcast episode too.