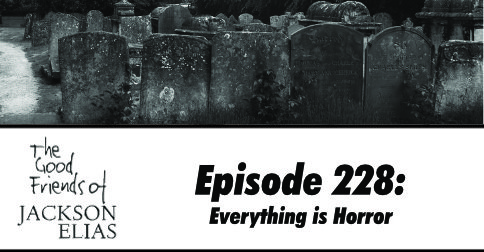 We’re back and we’re getting scared. Everywhere we look, there’s something creepy hiding in the shadows. Sometimes it seems like there’s a bit of horror in every game, regardless of the genre. Maybe a nice cup of chamomile will calm us down. Let’s just hope it’s not poisoned. Or full of sharks.

Main Topic: Everything is Horror

We’ve paused our discussion of The Dream-Quest of Unknown Kadath for a few episodes. Matt is seriously ill and currently in hospital. We don’t know how long he’s going to be out of action but we wanted to save the resolution for his return. Until then, we’ve called upon some of our good friends in the podcasting world to stand in as guest hosts.

This time, we’re joined by Baz Stevens of the wonderful What Would the Smart Party Do? Along his with co-host Gaz, Baz has been a cornerstone of the British RPG podcasting scene for some years, offering insight into a wide range of systems and genres.

While Baz tells us he is not a horror fan, he suggested that we talk about how the horror genre seeps into other forms of gaming. And who are we to say no?

You can find Baz’s projects here:

You can also hear Baz on our live seminars with the Smart Party.

As we’ve mentioned, Matt is gravely ill. He has had to undergo a number of operations to control a nasty infection and has spent the past week in a coma. Happily, at the time of posting, he has regained consciousness and is showing signs of recovery. We’re not sure how long it will be before he is feeling up to recording again but we shall keep his seat warm for him.

A Weekend With Good Friends

At the time of release, we are mere days away from A Weekend With Good Friends. This is the online convention organised by the wonderful listeners of the podcast, taking place on our Discord server. The con is scheduled to run from the 18th to the 20th of February 2022.

GM and player signups have now closed. Don’t worry if you missed the deadline, however. There will be pickup games running throughout the convention. Please check the #awwgf-info channel on our Discord server for details of how to offer or join pickup games.

The image for our episode graphic this time features a portion of a photograph by Klak of Klak, presented under a Creative Commons Attribution-ShareAlike 3.0 licence.