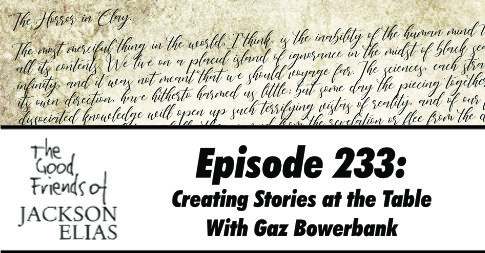 We’re back and we’re making stuff up. Sure, it’s a bit disjointed, filled with inconsistent characterisation, narrative dead ends, and terrible jokes, but it sort of feels like a story. What do you expect when a bunch of people create it on the fly, all pulling in different directions? Any story there owes more to cheap beer and bad dice rolls than careful planning. If we read this tosh in a book, we’d ask for our money back. Yet, somehow, we’re all happy with it. And anyway, it’s still better than a Dan Brown novel…

This episode is a lively discussion of what it means to create stories at the gaming table. Just talking about RPGs in terms of stories is likely to start an argument, and this episode is no exception. What do people mean when they talk about stories in the context of an RPG? Is an RPG scenario constructed anything like a story? And whose responsibility is it to create a story at the table anyway?

We’ve paused our discussion of The Dream-Quest of Unknown Kadath for a few episodes as Matt has been seriously ill. During his absence, we have called upon some of our good friends in the podcasting world to stand in as guest hosts.

This time, we are joined by Gaz Bowerbank, co-host of the What Would the Smart Party Do? podcast. Gaz’s co-host, Baz Stevens, joined us a few episodes ago for our “Everything is Horror” discussion, so we thought it was time to complete the set.

As we mentioned, Matt has been seriously ill recently. He is well on the road to recovery, however, and we hope to have him back with us next episode.

We are busy finishing the text of issue 9 of The Blasphemous Tome. This issue’s Call of Cthulhu scenario comes from our own Paul Fricker. “Step Into My Parlour” is a sinister tale of street gangs and weird drugs, set in 1880s New York City. Everyone backing us on Patreon at the time of release in late June will receive a PDF or print copy.

Scott on You Awaken in a Strange Place

Scott recently appeared with Dave and Eoghan from How We Roll on You Awaken in a Strange Place, a new RPG podcast from Light and Tragic. This was an improvised game that ended up following the misadventures of a team of megafauna wranglers and a strange alien world.