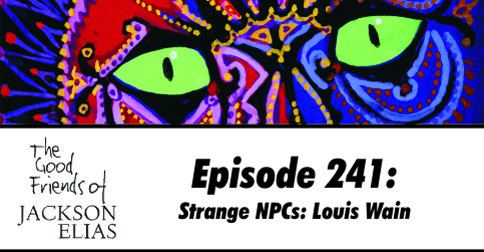 We’re back and we’re trying our hands at cat breeding. According to these instructions we received from Louis Wain, the secret is electricity. The cats don’t seem to happy about this, even if it does produce interesting patterns in their fur. At least they are all pointing towards magnetic north now, however. And isn’t that what cats are supposed to do?

This episode is is the latest in our Strange NPCs of History series, in which we look at notable people who might inspire games of Call of Cthulhu. This time, we’re discussing Louis Wain, the eccentric English artist whose cartoons and paintings of cats caught the world’s imagination in the late 19th and early 20th century.

Despite this fame, however, Wain was mainly remembered for his psychotic illness for many years, with both medical professionals and critics pondering what effect it had on his work. Partly because of this, Wain has remained a cult figure in popular culture in the decades since his death. The last year has seen renewed interest in his work, following the 2021 biopic, The Electrical Life of Louis Wain.

Our special guest for this episode is cuppycup of the Gold-ENnie-Award-winning Ain’t Slayed Nobody podcast. Regular listeners will know that we’re all fans of the Old West arc, “Y’all of Cthulhu”, that has been running for the last couple of years. They have also done a number of side projects with Scott, including a playthrough of his scenario “Catland”, which features Louis Wain as an NPC.

After last year’s cancellation, Necronomicon Providence is returning for 2022. Paul is on his way as this episode goes out and hopes to see some of you there. Unfortunately, neither Matt nor Scott can make it this time. Maybe in 2024!