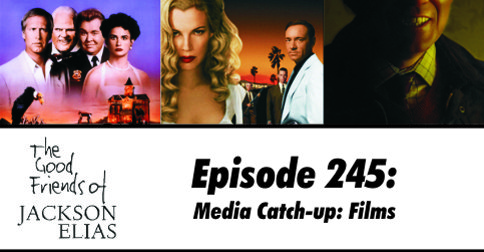 We’re back and we’re getting all eclectic. It’s simply inevitable that if you ask the three of us to pick films, our selections will not mesh together at all. Just think of this episode as an unlucky dip, or maybe a plum pudding where the sixpence has been replaced with a ninety-year-old man’s bedpan.

This episode, we’re returning to our media catch-up format to talk about films we’ve watched recently. Two of us decided to head back to the ’90s, although only one of these selections could be called a classic. Paul opted for a more recent release, and do be warned that his segment is especially spoiler-heavy.

Scott is now deep into his 2022 October Horror Movie Challenge. He is currently posting a horror film review every day on this very blog. These are all films he has not seen before and, largely, ones available on streaming services. If you want to check out his selection, or even play along at home, you can find full details here.

As we recorded this episode in September, it was a little difficult to discuss details. Instead, Scott mentioned two films he’s reviewing for the upcoming issue 10 of The Blasphemous Tome. These films are Moloch (2022) and VFW (2019). Our brief discussion of them also makes mention of Assault on Precinct 13 (1976), The Warriors (1979) and Class of 1984 (1982).

No sooner has issue 9 of The Blasphemous Tome gone out the door than we’ve started work on issue 10! If you have any articles of up to 500 words or artwork you think would fit, we would love to see them. Just drop us a line at submissions@blasphemoustomes.com.

Along with Matt’s new scenario, this episode will include our regular year-end features. Expect discussions of our favourite episodes of the year, notable games we have played, and Matt’s usual articles about cocktails and limited-edition RPG books.

The Miskatonic Repository Convention takes place this weekend, from 14-16 October 2022. Paul & Mike Mason will be appearing on a panel about “Getting Creative With Cthulhu” on Friday evening at 9 PM BST. Scott will be running Philip G. Orth’s scenario “Sound of the Sea” on Sunday at 2 PM BST.

Paul managed to attend a number of conventions this summer. He briefly discusses his time at Continuum, Owlbear & Wizard’s Staff and Necronomicon Providence. The latter proved especially exciting, with a livestream of the new Pirate Borg RPG and a game with our good friends at Into the Darkness.

The next Concrete Cow convention is imminent. This is the semi-annual convention organised by the MK-RPG club. It takes place at the Old Bath House in Wolverton, in the northern reaches of Milton Keynes, on Saturday the 15th of October. Full details can be found on the convention website.

A Weekend With Good Friends

GM sign-ups for A Weekend With Good Friends are currently open. This is the online RPG convention organised by our lovely listeners and hosted on our Discord server. We have a web page with important details and links, which we will update as things progress.

The important dates are: