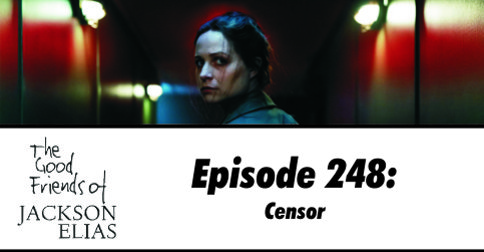 We’re back and we’re getting ready to snip. Our scissors are sharp, our tape is sticky and our minds are made up. This poor film doesn’t stand a chance. Sure, we could censor it carefully, preserving as much of the original narrative as possible, but would that really be safe? Far better to hack away in a frenzy of righteousness! And then, maybe, we can move on to cutting up the real source of corruption.

Following on from last episode’s discussion of moral panics over horror, we thought we’d look at a film that explores similar ideas. Censor is a 2021 British horror film, written and directed by Prano Bailey-Bond. It is set against the backdrop of the video nasties furore of the 1980s, following film censor Enid as she struggles to differentiate between imaginary horrors and real ones.

We use the film as a launching pad to discuss the more general topics of censorship, video nasties, and the not-so-good old days following the crackdown on horror films in the UK.

As well as getting hold of this issue, backing us on Patreon grants immediate access to PDFs of previous issues. We are still in the process of converting a few earlier ones to PDF, but there are currently 7 available for download. Most of these contain full Call of Cthulhu scenarios, written by one of the Good Friends.

Paul will be attending Dragonmeet 2022 on Saturday the 3rd of December, promoting the Rivers of London RPG with author Ben Aaronovitch. Stop by the Chaosium stand and say hi!

Matt and Scott will be (virtually) attending The Illusion Horror Con in December. Scott is running his scenario “Night Bus” for Call of Cthulhu. He is also appearing on two panels: Gamemastering Horror and Horror Inspiration From Other Media. Matt will be running his Kult scenario “Agglutination” and appearing on the Kult Setting panel.