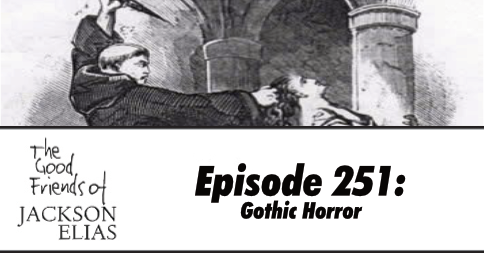 We’re back and we’re skulking around the old ruined abbey. Sure, the place is lousy with ghosts, but they’re not really that important. We’re far more concerned with the weather. If reading Gothic horror has taught us anything, it’s that storms are caused by our own inner turmoil. Or is that the other way around? Maybe we could figure it out if all these bloody ghosts would just shut up. Why won’t the past just stay dead?

This episode is our attempt to understand what exactly Gothic horror is. We’ve often mentioned how Lovecraft’s early work was rooted in the Gothic, but we’ve never really explained what that means. Gothic horror is one of those genres that you know when you see it, but actually defining it can be tricky.

Happily, Matt has a degree in English, and part of his studies involved the history of Gothic literature. We imposed upon him to dig out some of his dusty old texts and explain what elements go into Gothic horror and how the genre stands apart from other forms of horror literature.

Matt and Scott recently attended the Illusion Horror Con, taking part in seminars discussing horror GMing techniques, how to take inspiration from horror media, and the cosmology of the Kult RPG. All of these are now available for your streaming pleasure.

Paul has started his own substack over at paulfricker.com, talking about the various projects he has on the go.

Rivers of London Launch at Dragonmeet

Paul attended Dragonmeet last month to promote the new Rivers of London RPG. He took part in a seminar on the topic, alongside Lynne Hardy and Ben Aaronovitch. While this was apparently recorded, it has yet to appear on YouTube. We shall update the show notes should this change.

The PDF of Rivers of London is out now, with printed copies due in the spring.