The Kult: Divinity Lost kickstarter came to an end on March 31st 2016. Back at the start of the campaign, I put up a blog post mentioning I’d pledged for the Demiurge edition, a unique copy of the rulebook. At the time, it was only advertised as a question mark, with not even a mock-up presented. Well, yesterday (1218 days after the campaign ended), it arrived! It is a question mark no longer.

This edition has been produced by El Artesano Del Rey, the Spanish company that also produced the Luxury Edition of Vampire: the Masquerade 5th Edition. The leather is soft to the touch, slightly scuffed in places (along the edges of the covers, and the raised sections of the hubbed spine, etc.), giving it a “used” or “older” feel, and the front cover features a very shiny metal plate riveted in place with the Kult logo laser-etched, along with the Archon/Tree of Life design. This in turn is surrounded by another “thorny” metal plate, and extra rivets on the spine between the hubs. It is reminiscent, in a way of the Iron Book from the Kult setting. The two satin bookmarks are definitely helpful – I end up bookmarking the copy I use to run games with in several places.

The back is featureless, other than having the El Artesano Del Rey stamp towards the bottom-left corner.

The edges are in red, and when fanned still reveal the same “death is only the beginning” text as the other editions do (with the exception of the Bible Edition). I still think that’s an amazing touch to the design of the book!

The interior is the same as the other main Kickstarter editions (yep, more genitalia per square inch than you’ll find in the normal retail editions!) with the addition of a gold embossed El Artesano Del Rey label on the title page. It’s quite stiff to open due to the nature of the binding, so I didn’t want to force it open too much.

Having the same content, as mentioned, also means that I get to smile when I get to the first of the backer pages. It’s a fine title to have 🙂

Along with the book comes a couple of certificates and a papyrus sheet featuring the Archon/Tree of Life design again. As I don’t speak Spanish, I don’t know what the certificates say, but I can work out one of them confirms this is number “1 of 1”.

While it’s a very nice book indeed, it’s not quite what I was expecting (unlike the pledge description, I didn’t actually get a say in the production in the end, which was a little disappointing, but I think I would have gone for the same choice of leather as it’s so nice to touch), but it’s definitely a unique volume in composition and quality compared to the rest of my collection.

In my mind, I was hoping for some heavier-grade paper, so the book would be thicker (a bit like the Temple Edition was for Call of Cthulhu) and the cover to have featured the pyramid/eye design representing the Demiurge that was used in the recent Kult tarot deck. I kind of wish the metal plates had been sunk into the cover (a bit like the Orichalcum Edition of Exalted 3rd Edition), as that would look a lot nicer, and I wouldn’t worry so much about it scratching anything around it. However, it’s definitely growing on me and I’m happy to have been able to get it. Like I said, who wouldn’t want “the Iron Book” after all? 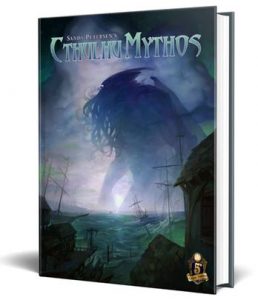 I guess I’ve always been a collector at heart. I’m definitely a completist. I’d find an author that I liked and I’d buy up all their works. Where possible, I’m particularly fond of buying books…

Hello everyone! It’s been quiet on the Kickstarter front for a while, but once again, like buses, there’s been a sudden flurry of activity and now there are a few projects to choose from. Here…